We believe secure by design should extend to all devices

Konica Minolta were looking for an independent cybersecurity consulting firm to test and validate the safety of their new bizhub i-Series multifunction printers. They partnered with our Security division and NTT DATA to perform a series of advanced penetration tests to identify vulnerabilities in the new Konica Minolta printer line. As a result, they were able to make code enhancements to increase the security of the devices and future-proof their products. These steps enable them to proactively allay buyer fears about potential security risks, with the use of third-party testing increasing their credibility with partner channels and end customers. In addition, the testing and validation now allows them to expand their product reach into sensitive markets.

Network connected devices offer end users tremendous opportunities for collaboration and ease of use. Unfortunately, those same devices are attractive targets for hackers — by exploiting a security vulnerability in a connected device, a skilled hacker can expose an entire network to data theft, business disruption and financial turmoil.

As a global provider of award-winning multi-function printers, Konica Minolta is highly aware of customer concerns about the security of network-connected devices.

‘There is more discussion than ever about devices as an endpoint vulnerability,’ says Chris Bilello, Vice President, Business Solutions Development at Konica Minolta. ‘For many of our customers, device security represents as much as 50% of their purchasing decision. We go through great efforts to make sure our printers are rock-solid before they ship.’

‘In an environment where customers are increasingly and rightfully concerned with security, NTT’s stamp of approval continues to put us over the top.’

Making 100% sure their devices are secure

‘The problem is that for many customers, especially in government, healthcare and finance, even 99.9% isn’t secure enough,’ says Bilello. ‘So, in 2016, we decided to make our products even safer for our customers. We looked for an independent company to provide brute force device penetration tests beyond the normal Common Criteria industry standards.’

Bring in the white hats

While several organizations offer ‘white hat’ IT hacking services that include device penetration tests, Bilello reached out to NTT DATA Security Services. ‘It was a no-brainer to choose NTT DATA for the job,’ Bilello says. ‘They have global credibility — their name is synonymous with technology, security and integrity. NTT DATA leverages advanced hacking techniques from NTT Ltd.’s Security division in addition to scripts, so their tests are more creative and aggressive than other penetration tests.’

Konica Minolta provided a line of their multifunction printers and their source code to NTT DATA for penetration testing. ‘After spending about 80 hours trying to hack into the devices we sent, the engineers could not find any major security vulnerabilities,’ says Bilello. This validation fortified Konica Minolta’s reputation for offering secure products and helped drive the product line’s success.

Konica Minolta recently announced its new line of multifunction printers, the bizhub i-Series. The bizhub i-Series features multiple next-generation technologies, including solid state storage, a new code base, firmware and integrated cloud services. To ensure that the product line is compliant with the highest data privacy and end-point security standards, Konica Minolta once again turned to NTT for penetration tests.

Bilello says, ‘We have a strong relationship with NTT based on our last success together. And importantly, they were very responsive in pen testing our new i-Series to help us get to market faster.’

NTT’s penetration tests of the i-Series line suggested modifications that would amplify device security and future proof the product. Anticipating an enthusiastic customer response, Konica Minolta acted on those suggestions before releasing the product to market.

By again obtaining an endorsement of the highest-security standards from a market- leading independent company, Konica Minolta continues to enhance their reputation and competitive position. Bilello says, ‘In conversations and RFPs, our clients are asking us more frequently than ever for penetration tests of our products. I don’t know of a competitor that has contracted a Fortune 500 company with the penetration testing capabilities that NTT has. In an environment where customers are increasingly and rightfully concerned with security, NTT’s stamp of approval continues to put us over the top.’ 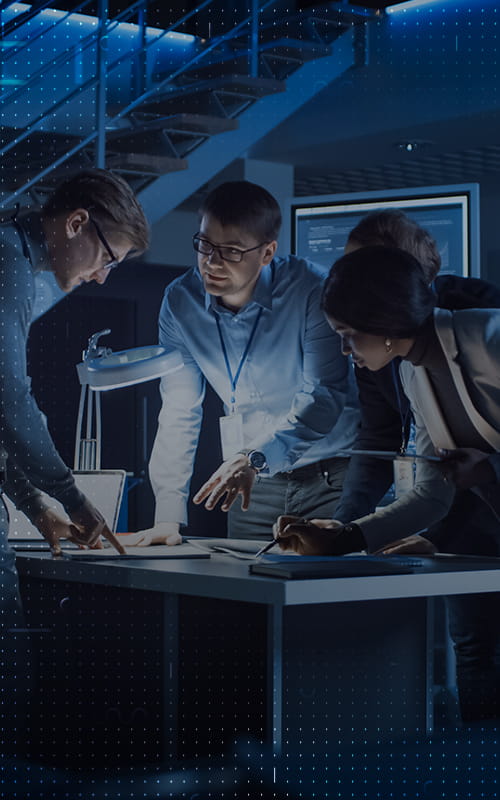 To ensure they could meet their customers’ demands for secure infrastructure Konica Minolta looked for additional ways to ensure their devices were secure.

Being able to show the lengths they went to to ensure their devices are secure provides customers with additional piece of mind.